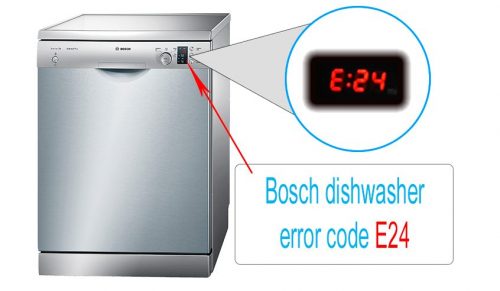 Finally, housewives are so happy to have a dishwasher, because they got a lot of free time for themselves. However, when we see an error code on a screen, for example, E24, and the device stops working, then the panic begins and we don’t know what to do.

How to decipher the E24 error code of the Bosch dishwasher

Probably they are right, try to think about this – the hose can’t bent because the device is set correctly and you don’t touch the hose. Moreover, in most cases, as users say, the fault appears in the beginning of washing, about 1.5-2 minutes after turning on, when the device does not even have time to gain water. Therefore, it is very strange that the instruction says that the E24 error informs about the drain water system malfunction.

Logically, in our opinion, in the case of the occurrence of the E24 error, the following reasons arise:

Speaking of the cleaning of the drain pump, there won’t be any problem. Just be sure to do it regularly. The filter, located at the bottom of the dishwasher, can be removed quite easy. Clean the drain hose with the help of a rope brush. Moreover, under the filter, you can remove the plastic plug, which provides access to the cogwheel of the drain pump. Then, you have to inspect it and remove any debris. Very often, the filter is clogged with seeds from fruit, for example, lemon or orange, resulting in the appearance of the E24 error.

Attention! Perhaps there is a clog in the junction between the drain hose and the drain for sewage. It must also be cleaned.

The dishwasher pump can be clogged too, and, as a result, it stops drain the water. So, the E24 error code appears on a screen. Perhaps there are some hair or thread on the impeller itself. It has to be removed too.

Tips from users on forums how to fix the Bosch dishwasher

All of the above-mentioned methods how to cope with the E24 fault may not help. Having browsed a big amount of forums of this theme, we decided to suggest some advice of the error eliminating. In some cases, the E24 error doesn’t cause any problem and after cleaning the hose with the help of a wet vacuum cleaner, the malfunction eliminates. One user in a long struggle with the fault found the cause in the drain pump. When it is turned on, the impeller of the pump refuses to rotate, so the pump does not gain water.

Some users admit that the E24 error code could be removed by simple manipulations. They tried to switch on and off the machine. But we can’t recommend this method, so we won’t even describe it. Point is that this variant doesn’t solve the problem, it can only make the dishwasher work at maximum power, which in the end will lead to more serious problems.

The optimal and more correct way to eliminate the E24 code in Bosch machines is also written on forums.

Pay attention to the following tips:

If none of the methods help, you need to look for a professional, who will help to decipher the cause of a fault and fix it.