Any dishwasher is not immune from various breakdowns or malfunctions, the same applies to Samsung dishwashers, which are the most popular manufacturers. The main thing here is to correctly identify the problem, and then correctly eliminate it, then the dishwasher will work properly. The article provides information about the 5 most famous problems of Samsung machines, read on to find out more about how to solve them. 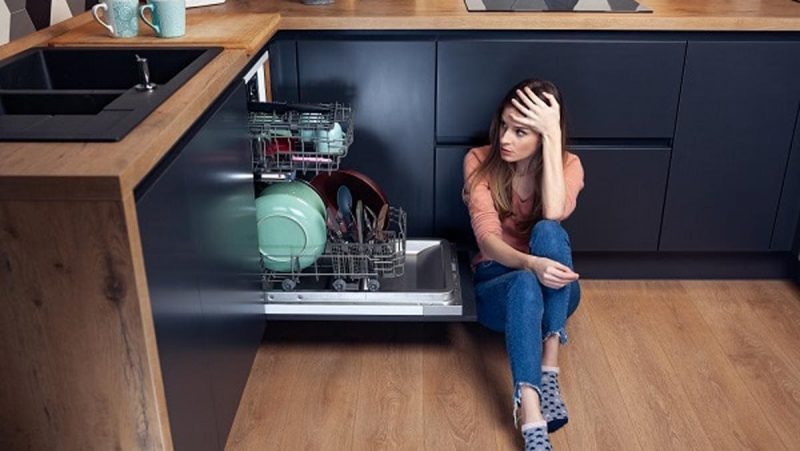 If the Samsung machine does not wash dishes

The most common problem that many users have is that the dishwasher on the top rail (most often) stops washing dishes. In this case, first inspect the sprinklers. Make sure they don’t have any debris that could get in there; carefully look at their small holes, if they are clogged, then the water will be thrown out much weaker than usual.

If you find trash, remove it. In order not to clog the spray arms in the future, before loading the dishes into the machine, rinse the utensils well. Next, after checking the atomizers, pay attention to the filter assembly. Any rubbish can also get under its knot, in the form of food residues, which will cause a deterioration in the operation of the equipment.

Because of this, the necessary water pressure for washing is not created in the machine. Remove the spray head located at the bottom. Use a screwdriver or other tool to pry off the water pipes. Then you need to remove the screws that hold the filter unit. After removing the screws, remove it by lifting the assembly up. 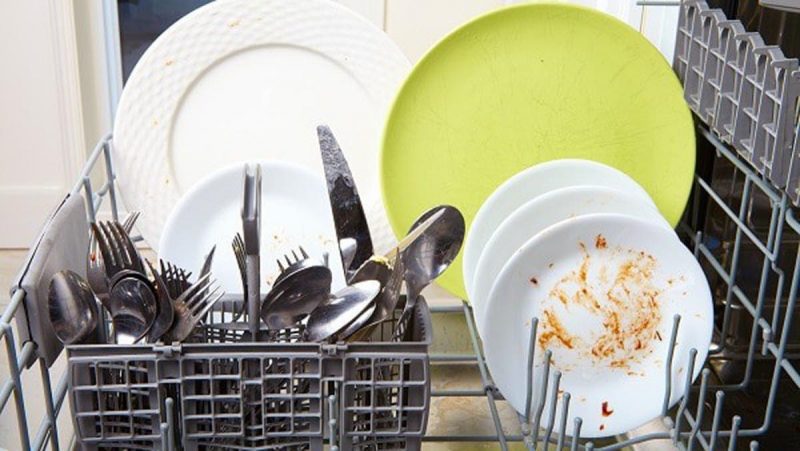 Remove the impeller too, to do this, turn the connecting screw to the side, clockwise. By removing it with your hand or something (for example, a turkey attachment) remove the dirt. When everything is done, you can collect the dishwasher back.

It is better to clean and rinse the filter on a regular basis. About once every one or two weeks, take it out and remove all contamination, so it will be much less likely to clog. This can also be done with sprinklers.

Poor draining is a very common problem with Samsung machines. She will not be able to properly wash off food waste if they have not been removed in advance. Such wear will lead to various breakdowns in your equipment. First of all, parts related to draining water can break. 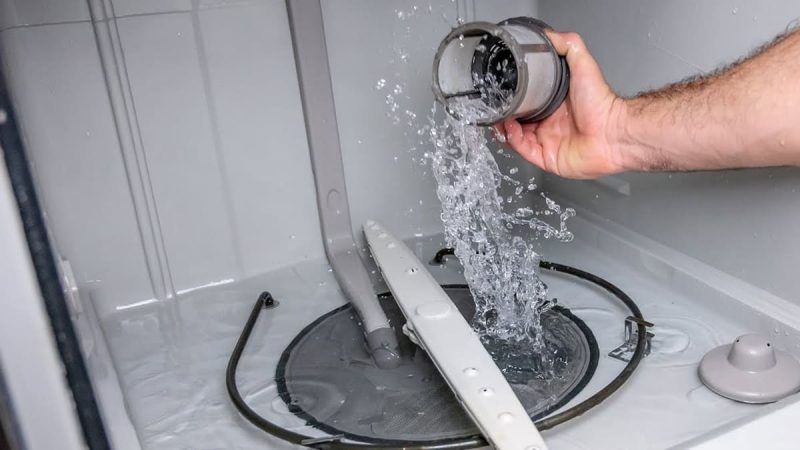 There are several reasons why the dishwasher drain does not work properly. Let’s consider the main ones:

Lost power or the touchpad not working

It happens that in Samsung machines there is no power, or the touch panel stops responding. Perhaps this is due to a malfunction of the main control board or sensor board. Disconnecting the device from the network will help in this, but this will not solve the problem only temporarily and completely. When you start using the device again, it may happen again.

Therefore, for the first step, the manufacturer advises resetting the home circuit breaker. That way you make sure it doesn’t work. But it should be borne in mind that not all defective types or models are associated with turning off the switch. Many users have found that the main control panel is to blame here. 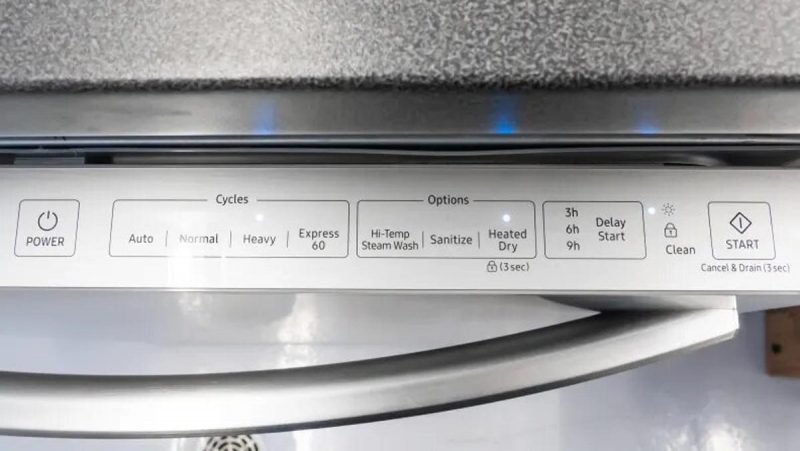 Unfortunately, the Samsung control panel breaks much more often than in other types of machines. Therefore, the panel stops responding or the device does not start at all. Basically, in such cases, the touchpad is to blame, to fix this, buy another one of the same kind and replace the old one. Before installing the component, turn off the dishwasher before maintenance and operation.

Next, remove the inner panel from the front door panel. It is not necessary to completely unscrew the door bolts, this is not necessary. The next step, you need to get the touchpad, disconnecting it from the network, while looking at and remember the direction of the wiring. After removing the old one, connect the new one in its place, correctly connecting to all connectors and terminals. Having fixed all the wires, you can assemble the doors back.

Difficulty starting the car is another common problem. There can be several reasons, but in general there are 2, and they are as follows:

1) Possible malfunction of the power management board. In the case of this, your device will issue an error code “PE”. If it is, you will need to change the board to a new one. It can be replaced using the lower access panels. To do this, you need to remove the cover, remove the broken part by disconnecting all the wires and put another one, and then assemble everything. 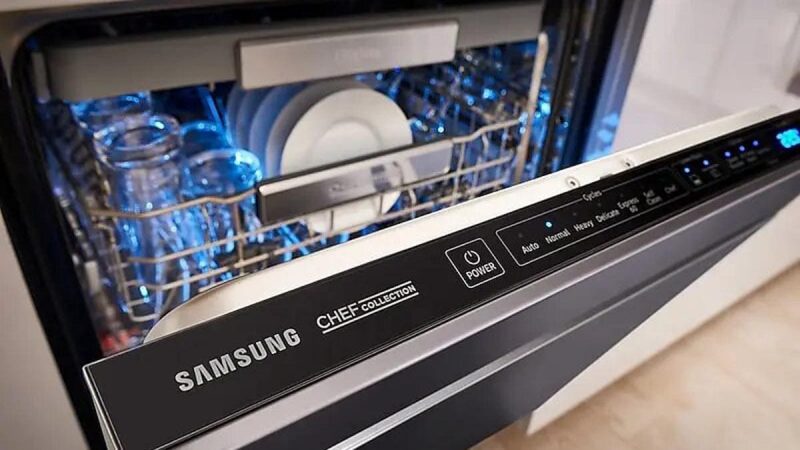 2) The locking mechanism is damaged. This problem can also cause the equipment to fail to start. It is quite common among Samsung models. If no error is detected or reported when attempting to power on, the door lock/switch latch may need to be replaced. The sequence of actions is as follows: remove the inner door panel from the outer one (i.e., as in the case of the touchpad); get the old lock, open the panel and pull it out; do not forget about the wires by disconnecting them; insert the latch onto the fixed screws and connect the wiring; finally put it all together.

The last and no less well-known problem is associated with poor drying of various utensils or its complete absence. The very principle of such a process is that plates, spoons, etc. are dried using a ventilation housing assembly and a heating circuit. Often the cause of this problem is precisely the first part, and not the heat exchanger circuit.

Thanks to the ventilation housing, steam can escape from the dishwasher. The part consists of a fan and a special hole where the actual steam goes. When this system does not work properly, it does not disappear, but remains inside the machine. Therefore, all the dishes do not dry out and continue to be wet. To solve the disease, the upper and lower shelves of the dishwasher must be removed. Having unscrewed the bolts, separate the outer from the inner panel. 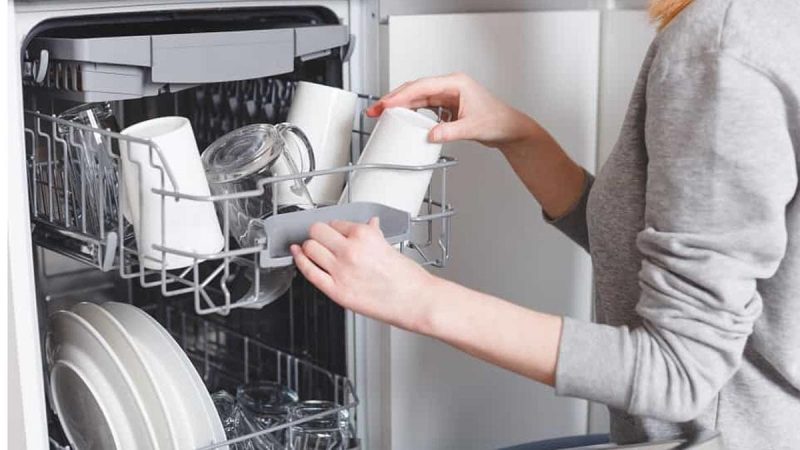 Next, remove the panel that is in front. Lower the console panel and at the same time disconnect all wiring, and the latch assembly can be removed to the side. Also, disconnect the wires of the ventilation casing, and then peel off the tape located there on the electrical wiring. Now open the housing assembly, having previously released the ventilation tube. In order to have access to the node itself from the front, turn its cover to the side, counterclockwise. It remains only to install a new node, do it in front of the door. Reassemble all parts of the dishwasher.

To avoid other problems with drying, use a special rinse aid. He is responsible for this process after washing.

Tips for maintenance and use of the device

In order for your dishwasher to serve you for a long time, you need to properly care for it and monitor its condition. Try to follow a few tips: 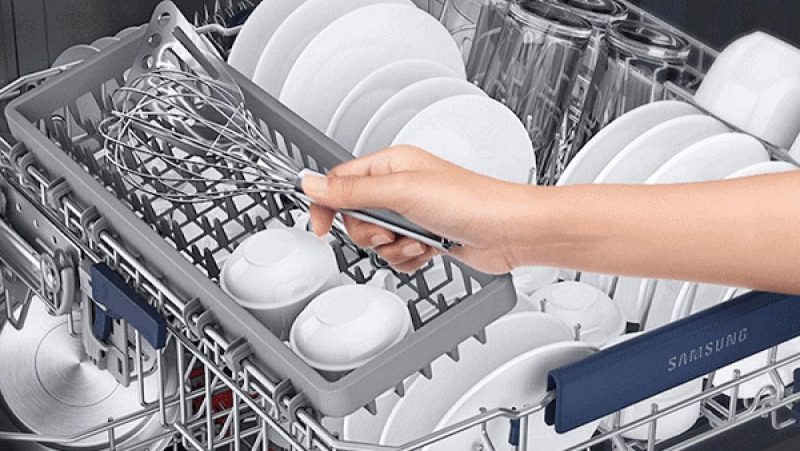 Repair all devices carefully and following safety precautions, including when repairing a Samsung dishwasher by unplugging it from the outlet and turning off the water source. Let’s hope that this article was able to help in solving problems and was able to answer questions regarding repairs.