Dishwashers are pretty easy to use. To start the program, just press a couple of buttons. However, the device will start working only after the door is tightly closed. If this does not happen, the device will give a warning signal.

Some owners are faced with the problem of the impossibility of closing the door. This occurs if the latch is damaged or the plastic basket is dislodged. The same situation will occur if there is an “obstacle” in front of the door. For example, incorrectly exposed dishes. 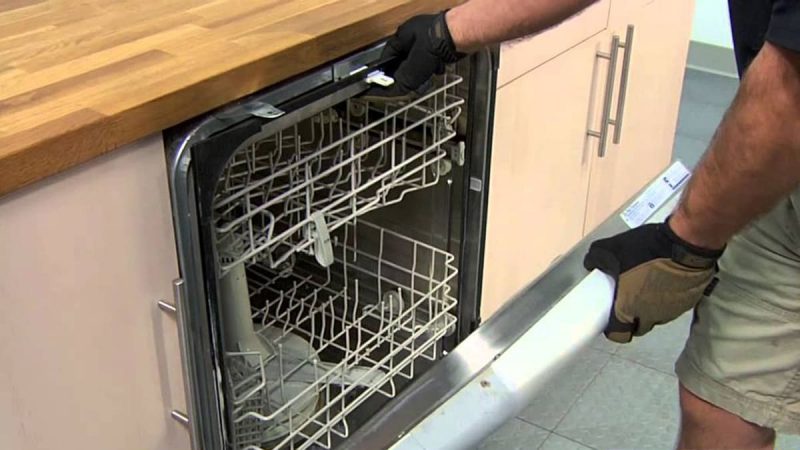 Luckily, fixing the problem with the tight closing of the door is quite simple. This malfunction does not have serious consequences for the performance of the device. Let’s consider for what reason problems with the door and latch may occur, and we will also list ways to solve this unpleasant situation.

Any device, when properly installed, will function without flaws. After purchase, the dishwasher is placed on a flat surface without tilting forward or backward. This is especially true for devices with plastic rather than steel tanks. This technique is more sensitive to incorrect installation.

Incorrect installation provokes problems with the performance of the device. There are two common situations that indicate wizard installer errors. The first of them is associated with the supply of water, and the second – with loose closing of the door. By the way, the listed malfunctions can also occur after several years of operation of the dishwasher. 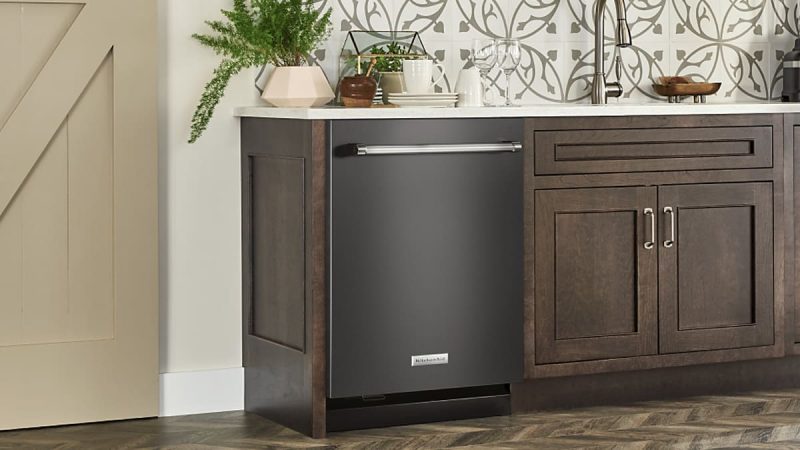 To check the correct installation, pay attention to the following features:

If the machine is tilted slightly, the door will not close tightly. The legs may need to be adjusted here.

If, after self-diagnosis, it turned out that the door had shifted, then it must be returned to its original position. This will require tools, namely a screwdriver and a wrench. It is necessary to tighten the loop and return the door to its place. Before starting work, it is important to disconnect the dishwasher from the power supply. After completing the work, it is worth checking whether the device is level on the floor. For this, the building level is used.

In appearance, the latch is no different from those that are installed on ordinary doors. However, the block lock has a little more functionality. Its main task is to keep the door closed during the wash cycle. The dishwasher fixes it both physically and electronically. Latch failures will prevent the program from running. This is done to prevent water leakage. 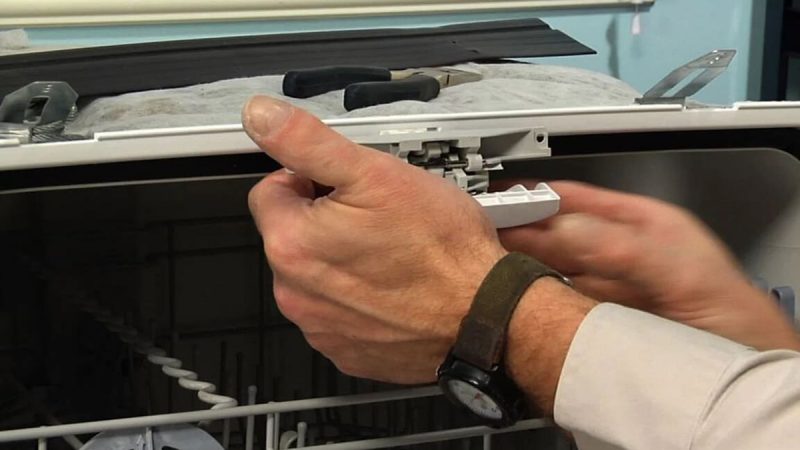 A safety lock is an electronic part that can fail over time. It happens that the latch wears out a lot and no longer performs its main function. In addition, it can break due to the frequent opening and closing of the door. In any case, a faulty lock will prevent the dishwasher from working, which means it needs to be replaced as soon as possible.

The work is carried out according to the following algorithm:

For work, a repair kit is used, which can be purchased at the appropriate stores.

Unfortunately, not every lock can be repaired. The latest models of dishwashers have a special design. It is very difficult to restore it after a breakdown. The easiest way is to replace the part completely. On old appliances, locks are repairable, so you don’t need to buy a new element.

After turning on the dishwasher, it is important to immediately check whether the lock is working. After that, you need to deal with the locking mechanisms, namely, to make sure the quality of the fastening and the spring. If one of these elements is damaged, they need to be replaced as they are all closely related to the operation of the door latch.

Sometimes the fixing “antennae” is damaged at the lock. You can also repair them yourself using a file. 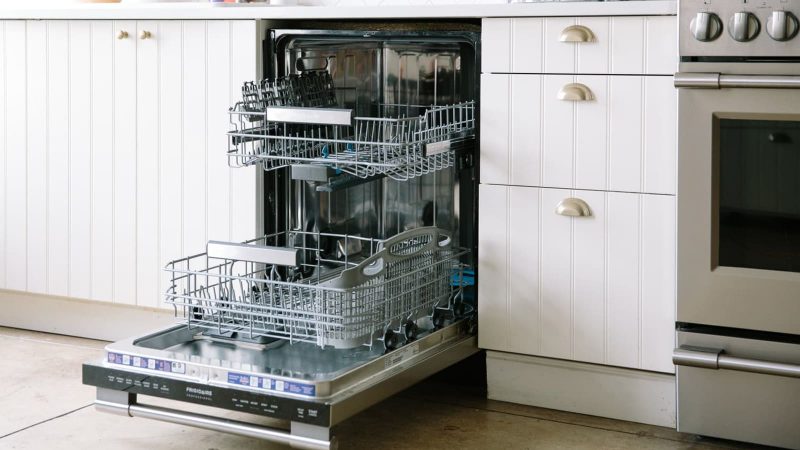 Before you start using the dishwasher, you need to understand that the appliance is quite complex in design. For example, the interior space is made in such a way that it fits as many dirty dishes as possible. Each item must be thoroughly washed.

The presence of an upper and lower basket makes any dishwasher efficient. Unfortunately, incorrectly installed racks create problems in use. If one of the shelves is installed incorrectly, the appliance door will not close. Accordingly, the washing program is not activated and you will not be able to start the cycle.

To fix the problem, you need to reassemble the shelves. To do this, use the book “Operating Guide” from the manufacturer. It provides detailed information on how to correctly assemble and operate the device. During operation, inspect the support rails and make sure that there are no foreign objects inside.

Always turn off the power and water while operating and repairing the dishwasher. This will help prevent injury or electric shock. 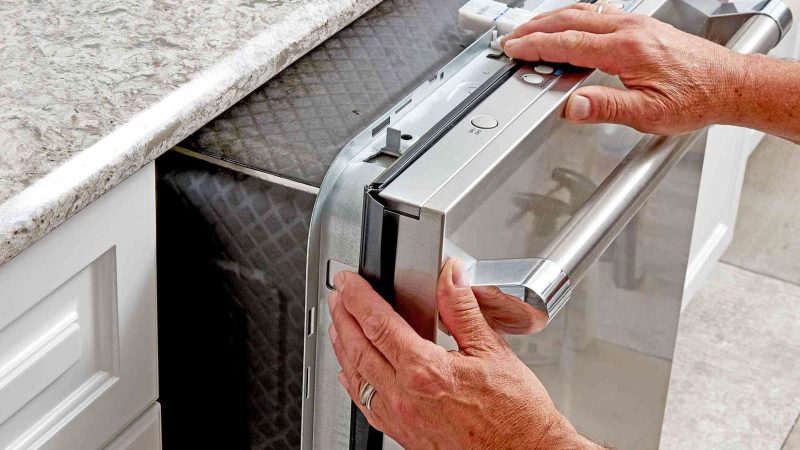 If the dishwasher door does not close, then the problem may also be hidden in the displacement of the latch. If the device and its components are installed correctly, no malfunctions can occur.

Sometimes, due to wear, deformation of the door tongue occurs. After that, it ceases to fall exactly into the hole of the lock. Skew often occurs as a result of a fallen rod that secures the same tongue. In this situation, you will need to disassemble the door and re-insert the rod into place.

The absence of a “hit” of the tongue into the hole also occurs when the dishwasher is deformed. This problem rarely happens, but in any case, you need to be aware of it. Sometimes the door of the appliance “crumples” as a result of transportation. You can determine the defect using a visual inspection of the equipment around the entire perimeter.

A detail such as a seal plays an important role in the operation of a dishwasher. All rubber elements wear out and harden over time. This prevents the door from closing tightly. If the seal is worn out, it must be replaced.

To replace the seal, you will need to follow the instructions: 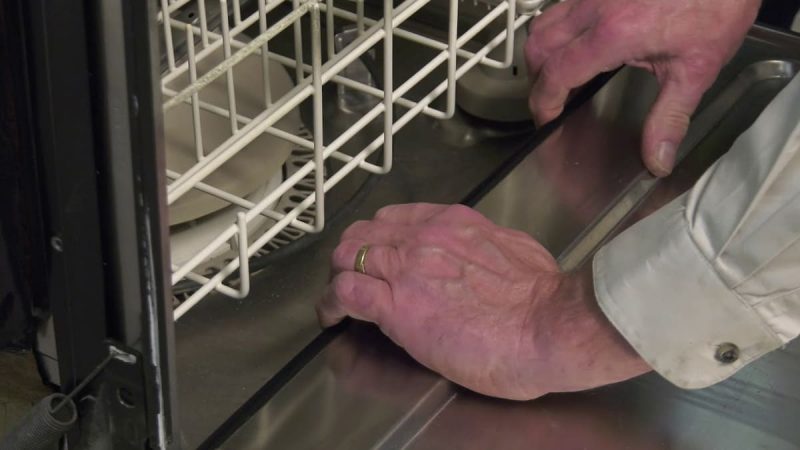 To replace the “bottom rubber”, you will need to remove the front panel mounting bolts. All other steps are the same.

If the rubber part is in good condition, but the door still does not close tightly, then a misalignment has occurred. For a long time of operation, the seal jumps off its place. In this case, you do not need to change the part. It is enough to correct it and return it to its place in a special ditch.

If visually the seals look good and are not displaced, but the door still does not close, then a foreign object has got inside the cuff. It is necessary to carefully inspect the rubber parts again.

If the dishwasher door does not close immediately after installation, then you need to check its connection. Perhaps the master made a mistake that led to such a problem.

If the device has been in operation for more than a year, then problems, as a rule, will be associated with a latch or seals. It is these elements that are most often damaged. Replacing worn parts with new ones will be the solution to an unpleasant situation.

In quite rare cases, the door does not close due to a factory defect. Fortunately, manufacturers are trying to equip equipment with auxiliary functions. There is a diagnostic system that indicates the cause of a particular malfunction.