For effective repair of any household appliances, it is necessary, first of all, to correctly diagnose and identify the cause of the malfunction. Only then should any action be taken. For example, the most common reasons leading to leakage of dishwashers are a broken water supply valve or a faulty water level sensor. In addition, failure can be caused by worn seals located in the drain or circulation pump, engine or door.

Each of the above problems is solved according to a specific algorithm, which is why it is important to correctly determine the cause. 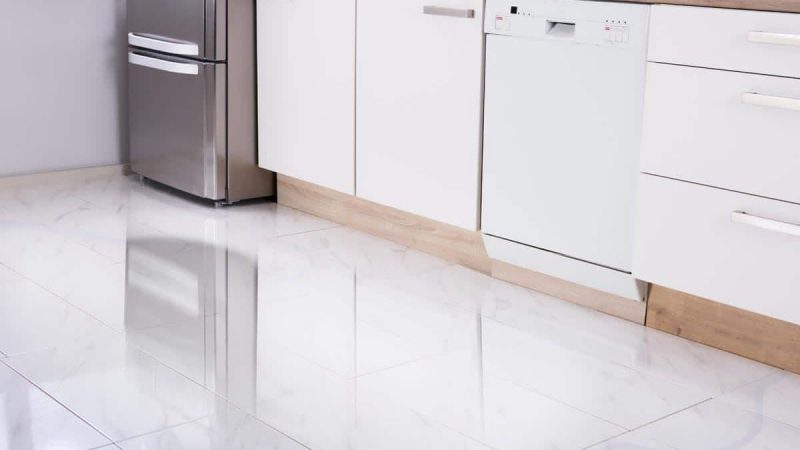 Dishwasher from Bosch leaks even when it is turned off

A water leak in a non-working dishwasher is not uncommon. At the same time, diagnosing can be quite problematic. Such a malfunction may be due to a breakdown of the water supply valve, as well as the appearance of a “backflow”.

Let’s start with the valve. This element can be locked in the open position due to the large amount of lime deposits. The fact is that a valve stuck in the open position is not able to correctly control the level of water entering the dishwasher. In this case, there is a high probability of an overflow of liquid that will go outside.

There is another option. In some cases, dirty water may enter the dishwasher from the drainage system. The liquid enters the equipment through a drain hose. This situation is possible in the event of a backflow caused by a broken check valve.

If during the diagnostics it was revealed that the root cause lies in the malfunction of the valve, then it will have to be replaced. It is worth noting that this element cannot be repaired, it will only have to be replaced with a new one. You can buy the part from the manufacturer, or in specialized stores. When buying, you must indicate the model number of the dishwasher for which you need the part.

A similar situation develops with a check valve located on the drain hose. If this part is damaged, it cannot be repaired, it will also have to be replaced with a new one.

In addition, a drain hose can cause a leak. Here, special attention should be paid to the correctness of its position. If it is placed low under the sink, the water will be able to return to the dishwasher. And with the accumulation of excess liquid will flow out of the equipment. To avoid this problem, it is necessary to install a drain hose above the drain line.

Kitchenaid dishwasher leaking even when turned off

Kitchenaid appliances can also fail. A number of leaks are caused by a malfunction of the circulation motor. In this mechanism, the seals of a number of parts, such as shafts, impellers, etc., can fail.

If funds permit, the entire pump and motor assembly can be replaced at once. Such drastic measures will help to avoid additional repairs in the future.

However, you can save money and conduct a more detailed diagnosis. Such a scrupulous approach will allow you to fix the breakdown locally and save money.

Dishwashers manufactured by Maytag have weaknesses. One of these vulnerabilities are frequent leaks from the bottom of the door. In the vast majority of cases, this problem is caused by wear on the door seal. 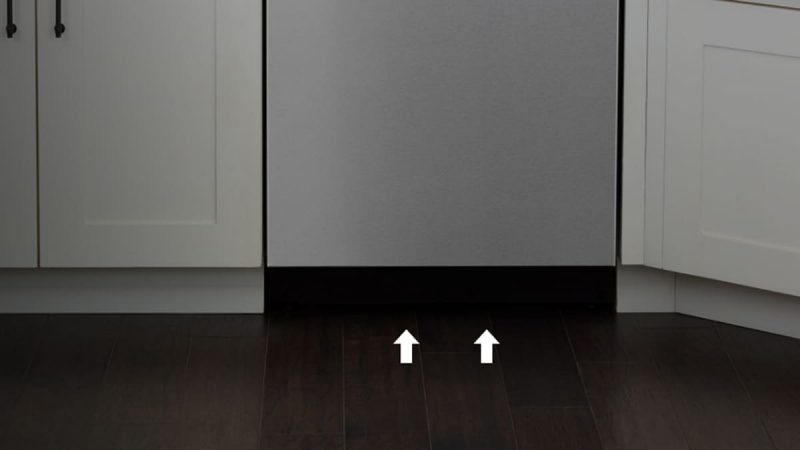 If you find that the leak is coming from the bottom of the dishwasher, then most likely it is in the mechanisms located under the tank. We are talking about a drain pump and a water supply valve.

If a leak was found at the bottom of the door, then a thorough diagnosis must be carried out. You need to start the search by checking the integrity of the door seal. Carefully inspect the entire surface of the material, it should not have any cracks or damage. If any defects were found, then the worn element will have to be replaced. In more serious cases, the entire door must be replaced.

What should I do if a Whirlpool dishwasher owner finds a leak? First of all, the cause should be looked for in the motor area. In addition, it is worth checking the integrity of the switch seal. For dishwashers from the manufacturer Whirlpool, this is a “weak point”. The wear of the element leads to the formation of leaks that are localized in the engine area.

Before taking any repair action, it is necessary to correctly determine the cause of the malfunction. Otherwise, you can aggravate the situation and spend even more money and time on repairs. Timely identification of the problem will minimize damage to the engine and avoid the occurrence of new breakdowns. 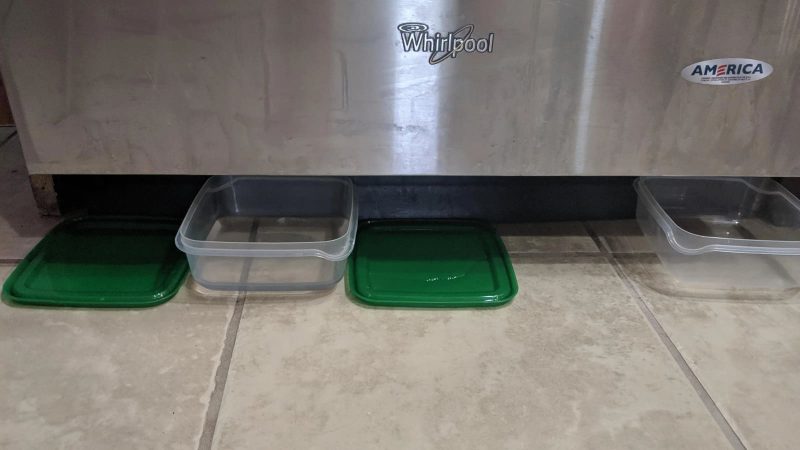 The principle of operation of GE dishwashers is similar to Whirlpool appliances, so the problems with them are similar. Most often, the car starts to flow when damage occurs in the engine compartment. To troubleshoot, you can use various approaches that will quickly and effectively eliminate the breakdown. After all, a broken dishwasher brings a lot of trouble, so it is important to minimize the time for repairs. The best option is to replace the entire engine. However, this method will require considerable costs, the purchase of a new part will be quite expensive. Therefore, in some cases, it is necessary to look for other ways to correct the situation.

If a leak is detected from the bottom of the dishwasher, first of all, it is necessary to inspect the drain shaft seal for wear. A leak can be caused by a faulty impeller or a worn dishwasher seal. Local replacement of defective elements will significantly reduce the cost of repairing a dishwasher. A new impeller or seal kit is much cheaper than a new motor assembly. 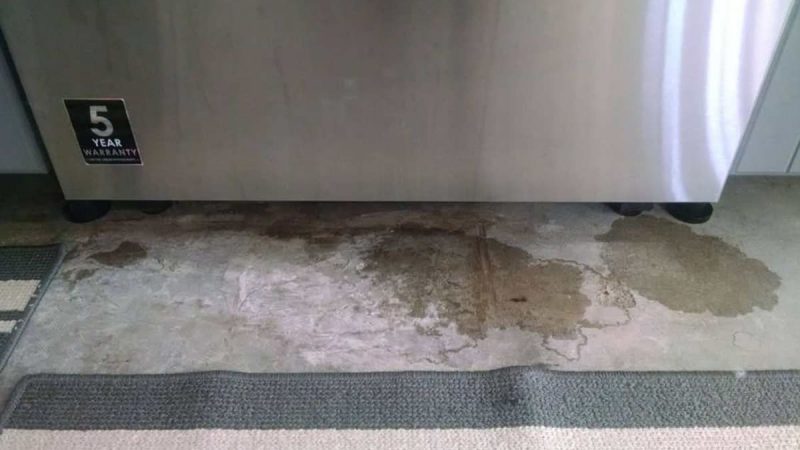 A list of the most common causes of dishwasher leaks

The reasons why the dishwasher starts to leak are very diverse. However, from all this diversity, it is necessary to single out those that are most common.

How much does it cost to repair a dishwasher

The run-up in prices for both repairs and parts is very significant. Sometimes as little as $10 will be enough to replace a worn gasket, and in some cases you will have to spend more than $600 to buy a new motor or pump. The brand of the dishwasher also affects the price, the cost of parts for repairing equipment from different manufacturers has a wide range. 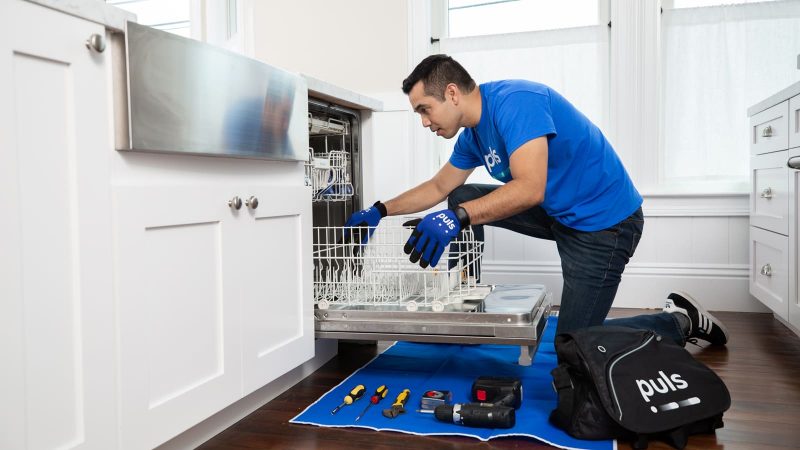 In addition, you will have to spend money not only on new parts, but also on the work of the master. Many do not have the appropriate knowledge and skills to carry out repairs on their own, so you have to resort to the help of specialists. In addition, the repair may require a special tool, which is unprofitable to purchase for a single use. It’s easier to call a repairman who has a whole arsenal at his disposal to perform work of any complexity.

In this case, as mentioned earlier, it is important to diagnose the cause of the leak. There is a great risk of wasting money and time. The technician will be able to quickly identify the cause of the problem and fix it, thereby saving you even money.