There are some errors in the work of the washing machines, which appear to be really dangerous, so if you see an F21 code on the display of your appliance or a combination of blinking indicators 1000, 800 and rinsing (or 800, 600 and rinsing for the older models), instantly unplug and unfasten your washer from the water supply, and call the repairman.

The error occurs when the drum of the machine can not rotate. The washer tries to fix it with its self-control mechanisms, but after numerous attempts, the drum doesn’t start spinning and the code is indicated on the display.

What causes the F21 Error code?

So your washer didn’t start working, or just stopped rotating the drum while washing process. After the appliance tried to fix the issue and failed, it showed the F21 code on the control panel, and you immediately turned the machine off in order to avoid electric shock. Now its time to find out why this could happen and how big the danger is.

The first and the most simple thing, that can cause the drum cycle issues of the washer is the weak voltage, which has nothing to do with improper exploitation or serious parts damage. But, unfortunately, this is a very rare case.

Another easy solution — there is a foreign object in the tank, which prevents the ro-tation. You can check it by simply spinning the drum manually, and if you hear an abnormal sound — the mystery is solved. Actually, it is pretty dangerous, as sharp objects can pierce the tank or drum and cause the leakage, which can burn the electronic system of the appliance. So make sure you remove the foreign object as soon as you notice it.

Besides the simple explanations, there are a few severe ones, that will definitely need professional intervention. Here is what the explanation of the F21 Error code can be:

As we already mentioned, it is better to call the specialist as soon as your machine’s control panel indicates the F21 Error Code. But if you feel you are experienced enough, you can replace the engine brushes and even try to check the Hall sensor yourself.

After unplugging and disconnecting the machine, take off the rear wall and the transmission belt, in order to get a better entry to the engine.

The RPS is located on the case of the engine, so to get to it you will need to take off the motor. It is recommended to take a few photographs of the proper connections and wired before dividing the motor. 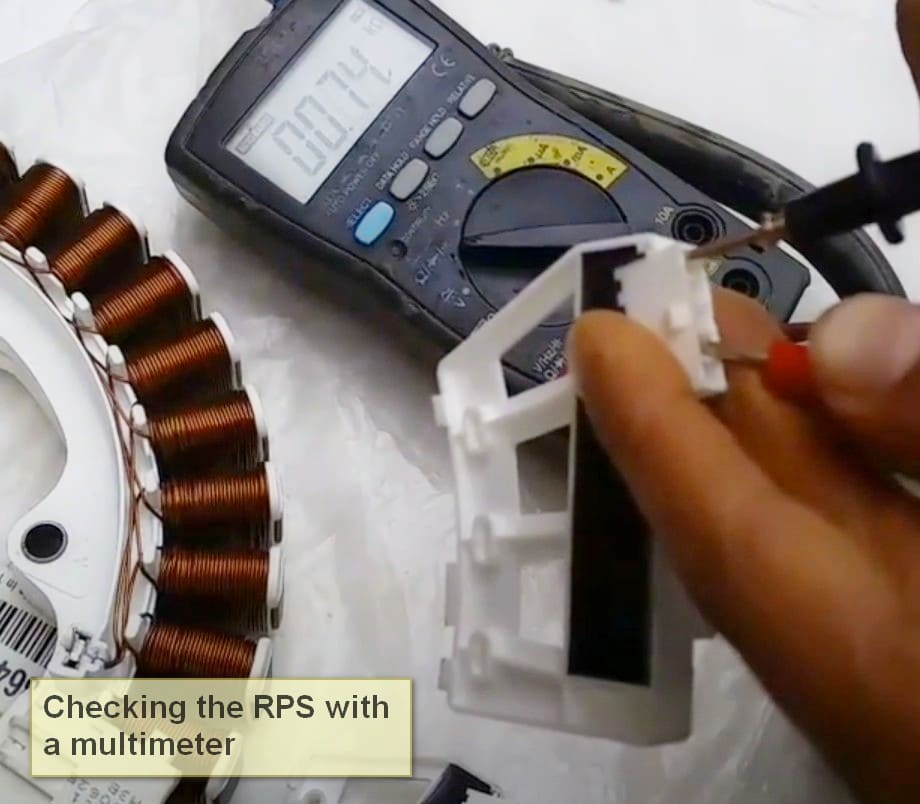 After you subtract the mechanism from the washer, you can take off the Hall sensor and carefully examine it, looking for signs of breakage. The reason may be in the dirt, which you have to clean off. But the most important step is checking the RPS with a multimeter. If it shows that the detector is out of order even after you cleaned it properly — it has to be replaced.

In case you found the reason and performed all the necessary actions, there is one thing about the F21 error code — it won’t disappear even after it is fixed, so you will have to reset the appliance manually, for it to start working normally again.

There are four steps to reset it after you put the program selector bar in the Off mode:

If none of the above-mentioned steps helped to get rid of the error, you should call the expert, as the F21 can be much more than serious, especially in case of tank leakage.