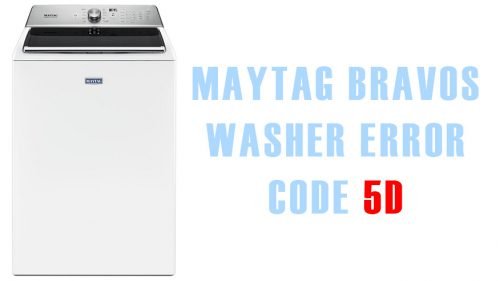 Most Maytag washing machines (made by Whirlpool) feature a LCD display, which displays signals from the main control board. Error codes are two-digit codes consisting of a letter and a digit. Each code denotes a particular problem. Once an issue occurs in a machine, an error code appears on the display. The Sd (not 5d!) appears when there is too much suds in the machine.

In some machines the code appears as “Sud”. Excess suds may prevent the drum from spinning properly. In some cases, it can stop abruptly. This happens because the machine gets a signal to provide more water to wash away the suds and gets overloaded. The cycle will be stopped, and the error will appear on the display. The “Cycle Complete” will appear, although it will not actually be complete.

Most likely, you have chosen the wrong type of detergent. It is advisable to use those labeled HE (High Efficiency). If you have poured in too much of it or are using a wrong type of soap, the sensors in the machine will misinterpret signals and confuse the system.

Also, the error code may appear due to a blockage or kinking of the hose, because the obstruction will make it impossible for water to get out of the drum. If the hose is kinked or twisted, straighten it out. If the problem persists, check it for blockages. Clear the hose, if necessary.

Not unlikely, the code has appeared by mistake. The likelihood is acknowledged by Maytag. If you have reasons to believe that this is just an error, press Pause/Cancel twice or Power once. The code will disappear from the screen. After a little while, try a cycle. If the issue is still there, unplug the washing machine, wait 1 minute and try again. If it does not work, use professional help.