Modern washing machines drain water on their own after completion of work. If the device ceases to perform this function, this indicates a malfunction of the mechanism.

The main causes of the problem include:

Each of the reasons requires an individual approach and solution in order to avoid the occurrence of an even greater number of problems. Read the instructions and the device of the washing machine first. 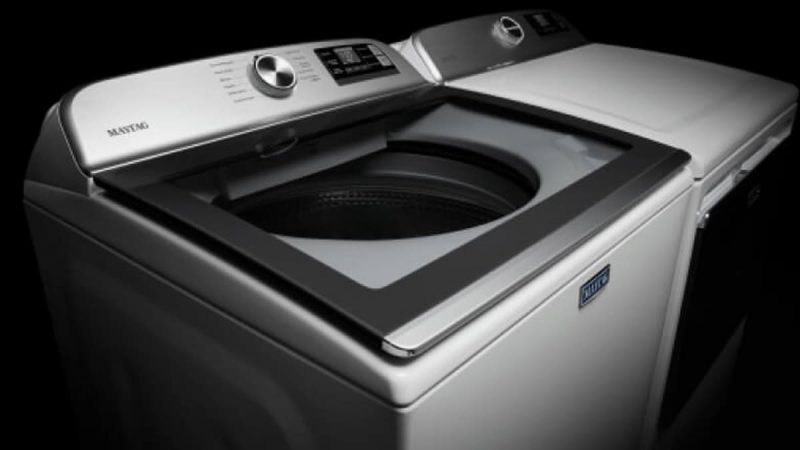 Please note that before you start repairing the washing machine, you need to disconnect the device from the power source. It is also necessary to prepare a towel and a container for liquid, because during the installation process water leakage may occur.

At the bottom of the washing machine there is a compartment with a drain pump, it is needed in order to drain all the water. This pump consists of a rotating impeller that starts moving when the washing machine is started. The movement of the element causes water to be drawn in through one end and discharged out the other end.

First of all, then you need to check the absence of mechanical damage to the drain pipe: if there are any holes, bends or clamps on it. Also check that there are no extra objects in the pipe that prevent water from escaping. Usually coins and small pieces of cloth get stuck in the pipe. It is not difficult to fix such a problem, you just need to remove the interfering element. 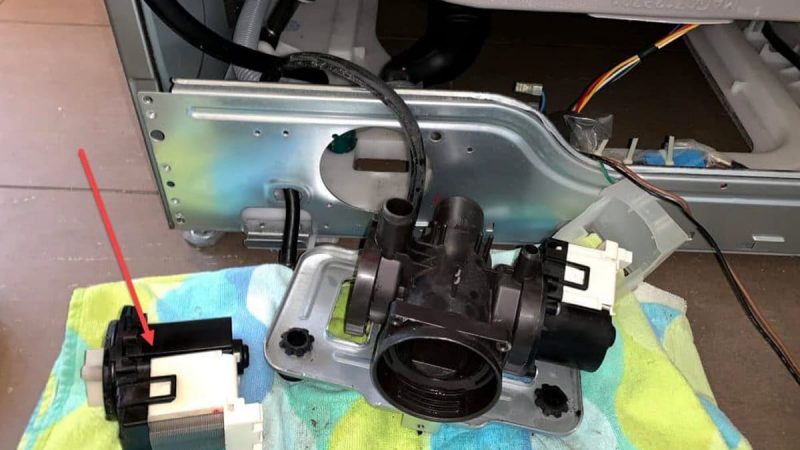 If the pipe is in working order, check the inner impeller. When it is deformed or damaged, the drain pump stops sucking and releasing water. Unlike the previous case, where the problem was fixed simply and quickly, a complete replacement of the drain pump will be required here. To remove and replace this element in the washing machine, you must first disconnect the device from the electricity network. After that, all interconnected elements must be disconnected from the drain pump so that the pump remains autonomous. Pay attention to how the parts of the structure are connected to each other. After that, insert the new pump in the same way as the previous one.

On modern washing machines, the door cannot be opened during washing: it is automatically locked after starting to prevent water from leaking.

Together with the door lock, an automatic switch is also connected, which is responsible for the correct functioning of the washing machine. It is he who sends a signal that the washing machine can start and continue to work. Thanks to this mechanism, water leakage is impossible. In the event that the door suddenly opens in the middle of a wash, the switch will signal an emergency stop.

It happens that the switch starts to work incorrectly. It may begin to send false signals, which is why the washing machine starts to execute incorrect commands. She either stops working altogether, or refuses to drain the water from the drum. 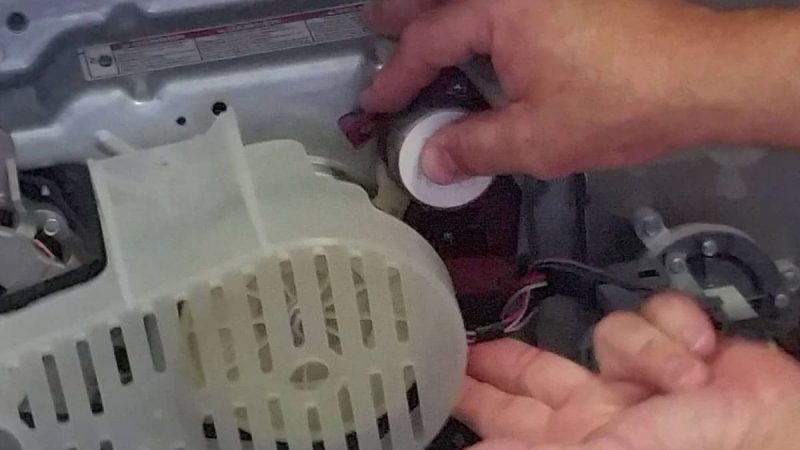 If you find such an error, you need to replace the lock motor and switch. You can perform the replacement yourself, since this procedure is quite simple. First you need to remove the door seal, this opens access to the motor and switch device. After that, you need to unscrew the screws connecting the body of the washing machine and the door lock, and then unscrew the lock and disconnect all wires and interconnected parts from it. Moreover, you need to remember the location of all the wires and parts adjacent to the lock, so that when installing a new one, connect everything as it was. After replacing the structure, it remains only to reassemble the washing machine.

Small items left in pockets and even small pieces of fabric may seem harmless at first glance, but contrary to this opinion, they can be the reason why water does not drain after washing. The fact is that small particles can penetrate the drain pump or hose and stand across the water flow, which is why stagnation occurs.

In modern washing machines, for such cases, a special filter is provided, which is located in the design of the drain hole of the washing machine. They, as the name implies, do not allow small objects to enter the plumbing system, which, in theory, should prevent blockages and stagnation. 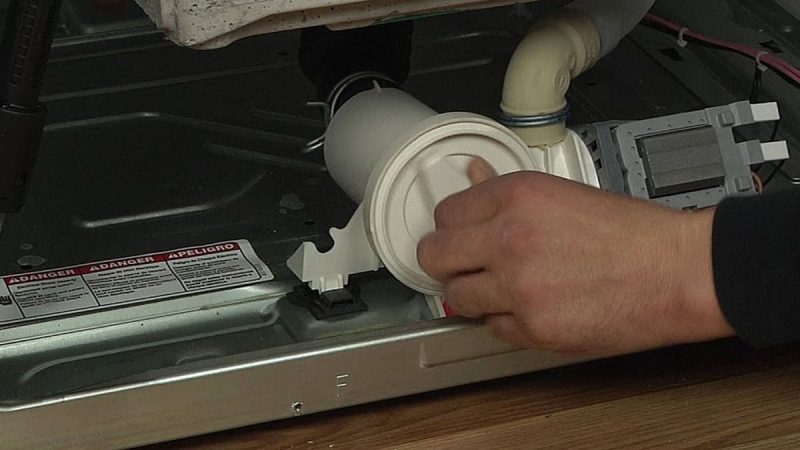 The filter is located at the bottom of the washing machine, usually located behind a small door located on the device body. If the water in the washing machine has stopped draining or drains badly, you can try to clean this filter, because after prolonged use it also becomes contaminated with microparticles: spools, lint, coins, soaked paper and other items that accidentally get into the washing machine drum.

To fix the problem, you need to open a small door on the body of the washing machine, behind which there is a filter. You can pull it out by unscrewing the protruding end counterclockwise. After that, you also need to unscrew the siphon and clean it from all accumulated contaminants. It is important, if possible, not to flush stones and blockages from the siphon into the sink, but to throw them away so as not to provoke another blockage. After you have rinsed the siphon and filter, put them back, screw tightly and close the door. These actions will help to avoid water leaks during washing. 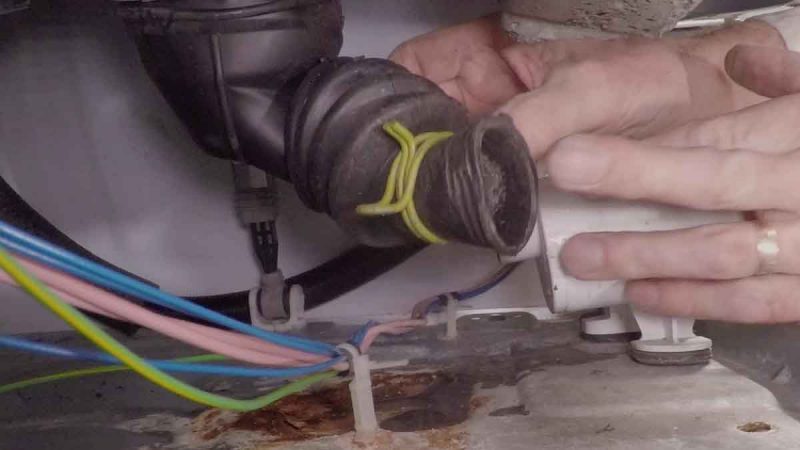 However, the flexibility and mobility of the drain hose also has disadvantages, for example, it can deform too much, due to which the space through which the water passes narrows, which means that the risk of blockages increases, because small particles easily cling to the protruding edges. It turns out that because of this, water cannot pass freely through the pipe, which causes stagnation. That is why the water in the washing machine does not drain completely. In addition, due to the mobility of the hose, it can be twisted, squeezed and bent. Any of the above circumstances may cause slow or no outflow of water after washing.

The first thing to do to fix the problem is to check the position of the washing machine hose. You need to make sure that the hose runs smoothly, that it does not twist anywhere and that there are no dents along its entire length. If deformation is detected, it is necessary to return the hose to its normal position, this will allow water to quickly drain into the water supply.

If the hose is so twisted that it is not possible to easily straighten it, you need to unscrew it and try to straighten it again. You can also try applying heat from a hair dryer to the hose to speed up the process.

Many washing machines still do not use an electric pump, but a drain pump based on the rotational movement of the drive belt. Typically, this technology is found in older devices, but sometimes it can be found on new machines. The principle of operation is that the rotation of the main drive belt drives the transmission pulley of the washing machine. The belt rotates the impeller inside the pump, which drains the water from the machine. 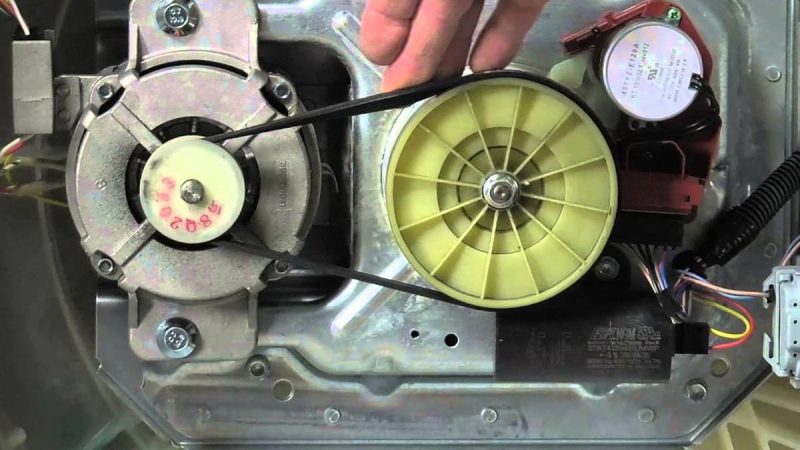 Prolonged use leads to the fact that the belts begin to wear out. The wear of the mechanism can lead to a broken belt. The only solution to this problem is to replace the old belt with a new one.

To do this, you must first remove the body of the washing machine, and then the old belt. After that, install a new one in place of the old one. Moreover, it is important to pay attention that the belt must lie flat, and it must also be sufficiently taut to complete the movement.