The most common reasons why a GE dryer squeaks are worn drive belts or motor bearings. A brand-new and recently installed appliance should not make extraneous sounds. This only happens if a foreign object is stuck inside.

If the user of the machine hears a creak, then you need to figure out the reasons for its occurrence. Consider the most common of them.

Why does my dryer make a shrill squeak?

There are three most likely reasons why the device emits a shrill squeak. These include worn drive belts, damaged idler pulleys, or worn engine bearings.

Consider each of these problems and find out how to deal with them yourself. 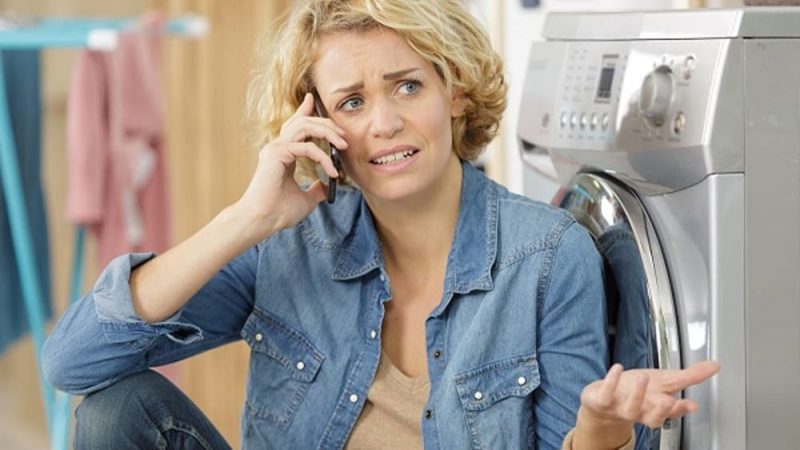 It is unlikely that any of the users of dryers thought about how the drum of the device works. Rotation is carried out using a belt that is connected to the motor. Made of rubber, the belt is “wrapped” around the motor and drum, while passing through the pulleys.

The motor generates power capable of rotating the belt and drum. The belt must always be taut, otherwise it will not retain its grip on the drum. But on the other hand, it is this tension that often causes a creak.

The drive belt constantly rotates the drum, which means it experiences continuous friction. This friction causes severe wear over time, causing the belt to stretch and break. When this moment comes, the belt becomes unable to “capture” the drum. During rotation, it slips, causing a strong creak.

Tumble dryer belts cannot be repaired. They should be replaced as soon as a wear problem is discovered. To make a replacement, you must follow the instructions: 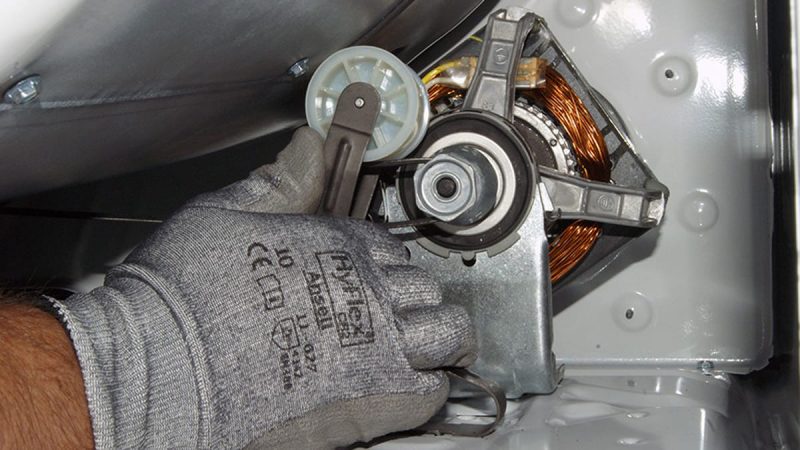 During repairs, it is important to remember that the belt is held by the idler pulley. To release the tape, you must press the pulley.

The idler pulley is another element of the system that plays an important role in the operation of the dryer. It is a wheel that holds the drive belt under tension for better rotation of the drum. Locating the pulley is pretty easy. It is located inside the dryer and is attached to a belt.

The idler pulley has the ability to wear out or be damaged. If part of the tension roller is displaced, this will cause problems for both the belt and the drum. If the latter continues to rotate, then the tape will begin to emit a loud squeak. This is due to the fact that the pulley is not able to maintain the desired tension.

To deal with the malfunction, you need to gain access to the pulley. To do this, follow the steps similar to those performed when replacing the belt. You can reduce the creaking sound by lubricating the tension roller with grease. However, this is only a short-term solution and will be useless if the roller is broken. 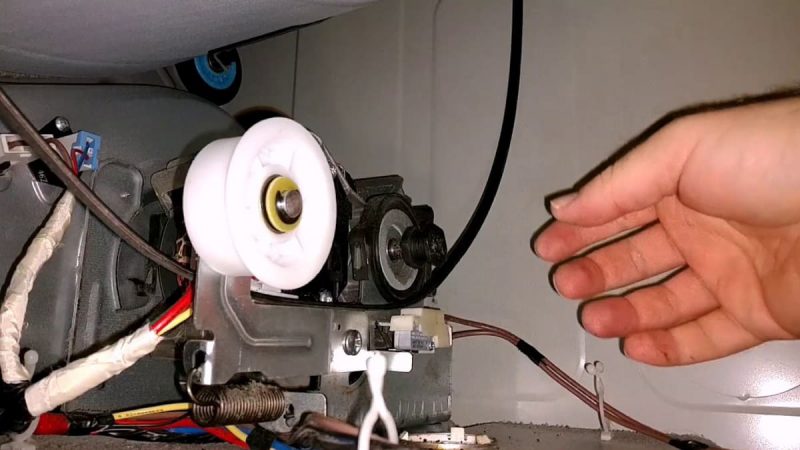 If, after self-diagnosis, it becomes clear that the pulley is damaged, it will have to be replaced according to the instructions:

Sometimes one fault can be masked by another. For example, if the drum continues to rotate, but makes strange noises and does not dry the laundry, then the problem is hidden in the temperature sensor or in the heating element.

A certain level of noise during operation of the machine is considered normal. The heat pump and motor often make a grinding or humming sound and this is not a malfunction. But if the device is malfunctioning, then it’s time to diagnose.

The rotating shaft motor is the element of the system that drives the dryer. The shaft is able to rotate at high speeds without making loud noises and creating friction. Bearings help with this.

Bearings, like other parts, tend to wear out. When this happens, the shaft experiences significant friction. As a result, a loud squeak appears, which indicates the need to replace parts. 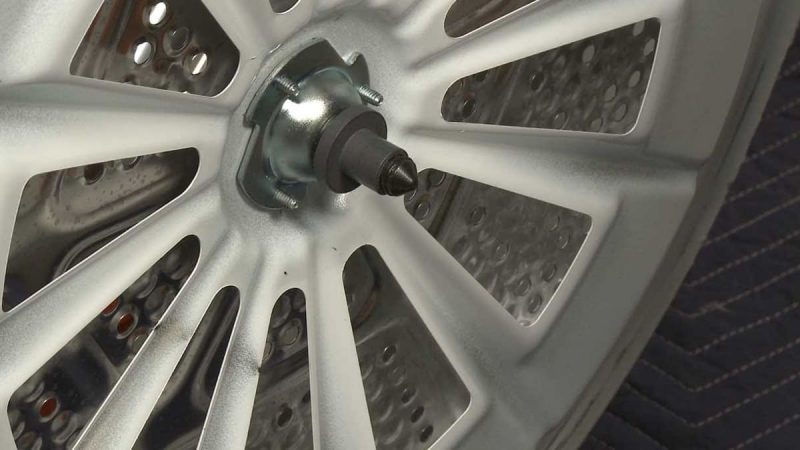 A squeaky sound coming from a GE dryer needs to be fixed as soon as possible. Ignoring the problem will cause the squeak to turn into a rattle. This will indicate that the engine has begun to break down from the inside. Repair of the device in this case will result in a large sum of money.

Recommendation. If you fix the problem at the initial stage, you will not have to spend a lot of money on the restoration and replacement of other spare parts. Replacing bearings is not as expensive as repairing an engine.

Sometimes it is necessary to replace the drive shaft, but doing it yourself is quite difficult. In this case, it is better to seek help from a qualified master.

Why does a GE dryer creak under load?

Diagnosing a dryer can be a daunting task, especially for those who aren’t familiar with home appliances. Serious problems are easiest to solve with the help of professionals. Of course, a malfunction is easier to fix on your own if a squeak occurs every time the drum rotates. But what if extraneous sounds appear only when the drum is loaded with laundry? In these situations it is worth paying attention to two reasons.

The idler pulley may not rattle when the drum is empty because the drive belt is tight enough to turn it freely. But for a heavy drum filled with laundry, more power is required. The load on the pulley increases, therefore it provokes a rattle. The owner needs to take care of replacing the tension roller, otherwise the machine will start to creak even with an empty drum, and then completely fail. 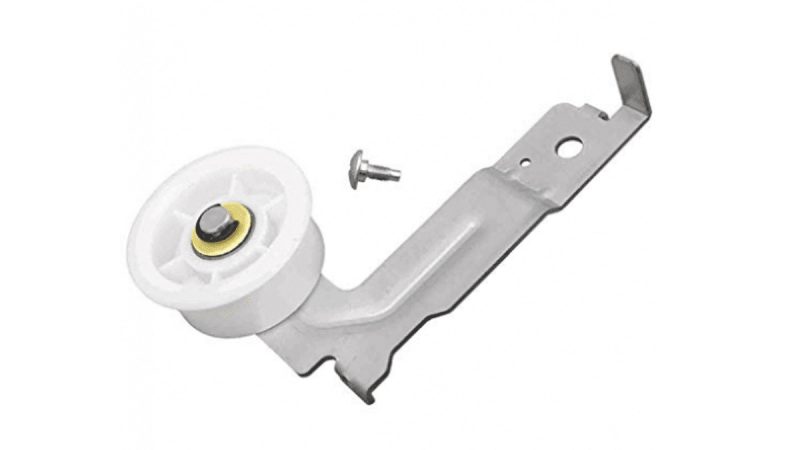 A seal is located at the front of the device. It prevents the drum from rubbing against the front panel of the machine. When the felt seal breaks or a foreign object gets stuck in it, the drum begins to come into contact with another surface. Accordingly, it causes a rattle.

Why does a new dryer creak?

A new tumble dryer may squeal in the following cases: 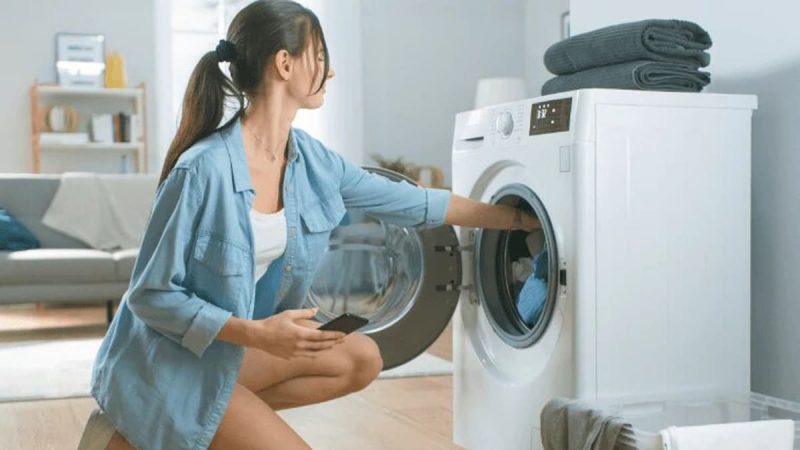 A newly purchased and installed device should not make extraneous sounds. But if this happens, then the system has a malfunction.

We do not recommend using the device until the cause of extraneous noise is found. Disconnect the device from the power supply and call the wizard.